It is a county in the former Coast Province of Kenya. Its capital is Kwale, although Ukunda is the largest town. The county has a population of 649,931.[2]

Kwale is mainly an inland county, but it has coastline south of Mombasa. Diani Beach is part of the Msambweni division. Shimba Hills National Reserve and Mwaluganje elephant sanctuary are other attractions in the county. 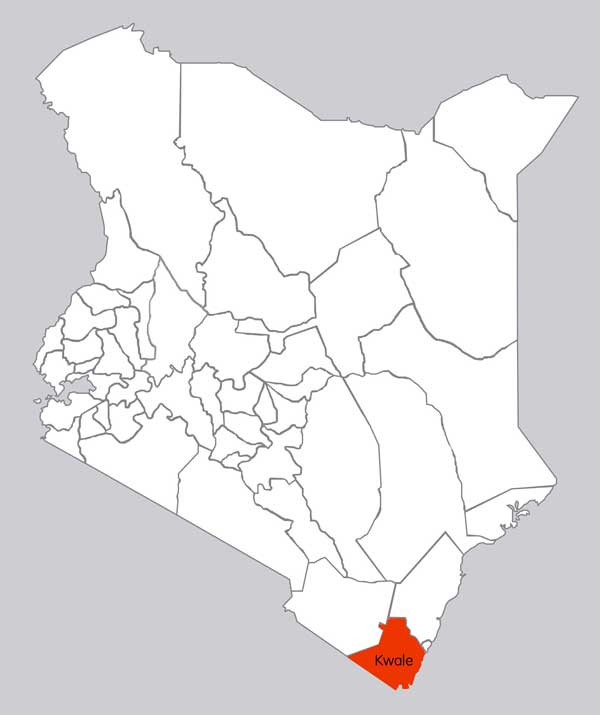 It consist of 4 constituencies 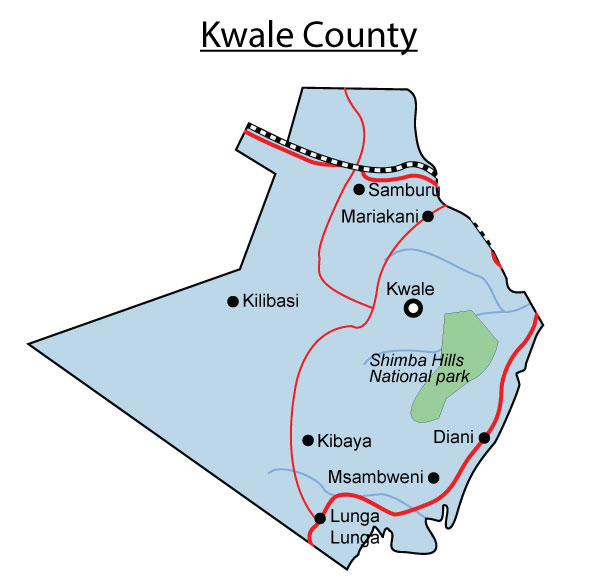 Kwale is the main town of the Digo and Duruma people. These people belong to the Mijikenda ethnic group.

The Mijikenda, and more particularly the Digo tribe, are considered some of the best cooks among the Kenyan tribes. Wali, a popular Kenyan food, is also a staple of the Mijikenda tribe. Wali is rice prepared with coconut milk, giving it a sweet taste. Fish and other seafood are also common in Mijikenda cuisine.

Hando is a popular traditional skirt worn by Mijikenda women. Traditionally it was worn as a knee length skirt, especially in the public to show respect by not exposing body parts that were regarded as private. The Hando was made from cotton fabric.

The Mijikendal believe that illness results from possession by malevolent spirits. Pepo za mwiri, a "spirit of the body", manifests itself in various ailments such as malaria, whooping cough, arthritis and smallpox. Bodily possession is treated with therapy, herbal medicine and magical ornaments. Pepo za kitswa, an Arabic-speaking Muslim "spirit of the head", can cause mental disturbances and necessitates a lengthy course of treatment which is similar but also includes an important exorcism ceremony called ngoma za pepo, "spirit dance". Both kinds of afflictions are diagnosed by specialists, waganga, who first identify the spirit then prescribe the course of appropriate treatment

Mijikenda Names – Naming of the child in Mijikenda is done in two, three ways;

1. A child is given a name while still in the womb by a relative; for example, the auntie would want the baby to be named her if it would be a female, and if it turns out to be a male he should be called after his husband. (Kutunikiwa) if no objection from other members of the family then the naming would be through.

2. If it turns out that some of the family members objected and proposed other names; then pieces of papers would be written all the names proposed by the relatives present during the naming ceremony, and then children would be called up on to pick each a piece of paper, the exercise is repeated three times, and the name that would be picked three times would be the name given to the new born child. The exercise is practiced to avoid gossip, favors’, etc. That can harm the baby.

3. Another way of naming is if a relative happens to pop up in the house before the 3rd day and name the new born baby it’s accepted.

Circumcision was a big celebration just like weddings or Edd celebrations in communities. Children, boys from seven or more families or the neighbor are identified, the family then puts the heads together for the celebration and the date. Each family will then contribute animals to be slaughtered or grains for the big day.