The plot is a little more developed but is still shaky. The English is still broken and the candidate makes numerous elementary errors. Simple words such as  "beautiful','decide' and 'mango' are mispelt. The language resources are so limited that the candidate has no word for 'ripe mangoes' which he/she describes as orange mangoe(s). The punctuation is however better.

The language ability has improved a bit  though the candidate is hampered by limited knowledge of the Endlish language. The mother tongue influence is heavy and story is hardly developed. There is nothing about it that is amusing! It fails to answer to the question. 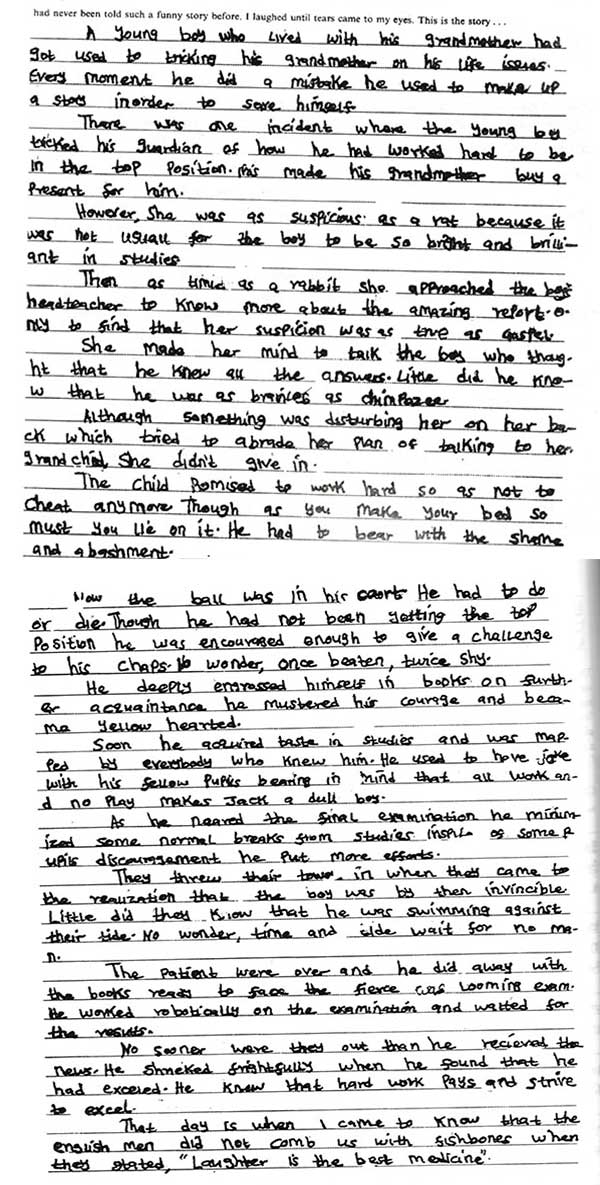 This candidate is operating at a level of language mystery slightly higher than that of candidate H. There is better control structure and idom. He has better command of vocabulary and the punctuation is better, except for juncture. There are however, many errors of spellings, for example, 'usual', 'in spite', 'received'. Some tenses are not correct, while some areas are vague. For instance, what does 'his chaps', 'was mapped', 'patient was over' mean? Such grey areas tend to reduce the value of a piece of writing.

The candidate manages to fit the story with the given opening very smoothly. The storyline is progressive and well executed. The preamble prepares the reader for the actiuon. IUn fact, the ivoli incident provides a beautiful foil against which to set the fiasco that is Kimani's attempt to gain 'manhood'. It heightens the contract and hence cowardice of imani, who not only causes laughter but his obnoxious conduct but more so whe he flees 'naked' and he is ridiculed henceforth.

Again there are few slips or lapses as when the candidate mixes up the spelling of  'ripped' with 'reaped' or say the crowed roared into laughter instead 'with laughter'. I call this lapse because l believe the candidate knows there is burst into laughter an expression which may have been in the candiadte's mind  as he/ she grappled with the options available to him/her. This is a more sober and controlled composition.