The paper tested the candidates’ ability to compose a personal and convincing story arising naturally from the sentence given. The story had to take cognizance of the excitement attendant to educational tours and the unusualness of the parade at the unusual time. Whatever the candidate chose to write on, it had to hinge on these two: either the antithesis of the excitement naturally expected by such excursions or the unexpected good news that eclipses the stories arising from the educational tour.
Besides, the account had to be interesting, accurate grammatically and fluent to read. The sentences had to show variety of construction and emphasis. Proper use of idioms and vocabulary enrich such an account and makes it captivating to read.

There is improvement in the quality of communication. Although the thought patterns are mother tongue leading to misuse of prepositions and errors of subject verb agreement, spelling errors have greatly reduced. There are vague areas: “every pupil was very forecast”, “looked scarily”, “myriad of thoughts”, etc, etc. But one is able to follow the account. 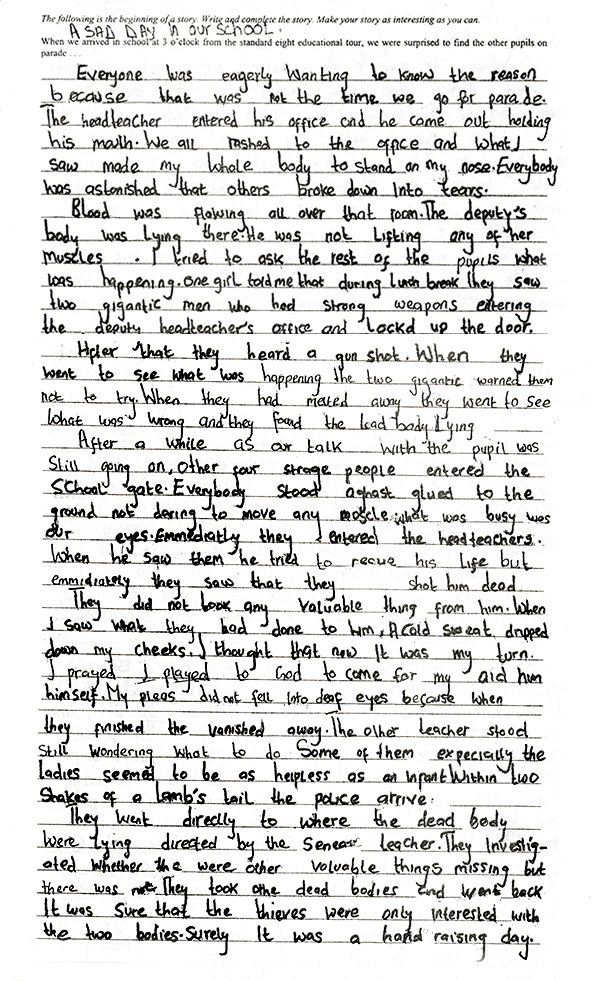 The composition displays some attempt to develop the plot and even create suspense, but which are greatly hampered by lack of language mastery. The use of idioms is faulty and some end up being ridiculous. Spellings are still a problem

The candidate communicates with some facility. The English idiom is fairly well mastered and the plot is well managed. Given that the persona is mainly the headteacher, the candidate has created a credible and passable piece of writing. However, punctuation especially of the direct speech is still a problem.

This is one of the pieces that merits the highest honours in this year’s composition writing. It is well conceived and well executed. The take off from the given sentence is superb. It involves the reader from the beginning to the end, and one can feel and share the enthusiasm of the candidate and feel that they are present at the venue of the action described. The language is good and apt. In fact such vagueness as in “radiants of joy ” is likely to be missed because of the involvement of the reader!