Water is a liquid that is found almost everywhere.

However, water can allow some solids to dissolve in it while it does not allow others.

For example, you can try to dissolve flour, salt, rice, coffee grounds or sugar in water and see the result. 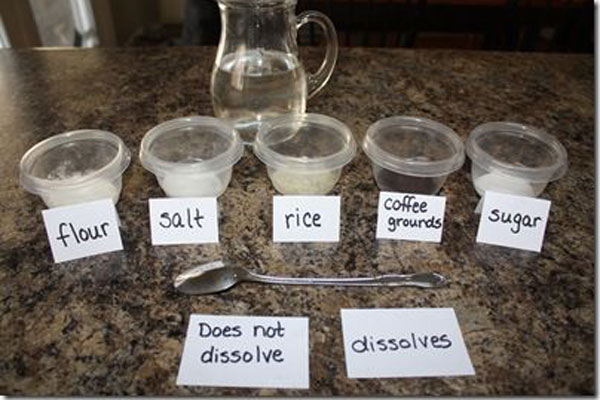 Any material that would dissolve in liquids is referred to as a solute.

Any liquid that dissolves the material is referred to as a solvent.

The mixture that is formed when a substance dissolves in a liquid is called a solution.

For instance, if you dissolve sugar(solute) in water(solvent) you end up having a sugar solution. See the following. 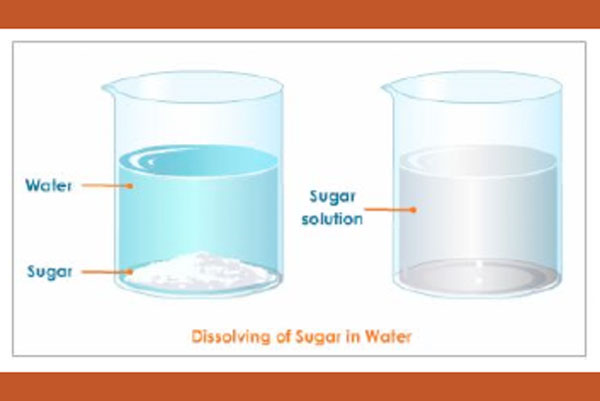 Examples of common solids that dissolve in water are sugar and salt.

Examples of common solids that would not dissolve in water are sand and flour.

When something can dissolve in liquids then the substance is said to be soluble.

Some liquids like water not only allow a solid to dissolve in them but also allows some liquids to mix with it.

When two liquids can mix together, they are called miscible liquids.

When the liquids cannot mix they are immiscible.

Any material in our surrounding if put in a liquid for example water will either sink or float.

Materials that remain on the surface of the water are known as floaters because they float.

Materials that move to the bottom of the water are known as sinkers and they sink. Floaters and sinkers have characteristics that make them either float or sink.

Examples of materials that float are wood, and cork.

Examples of materials that sink are metals and stones. 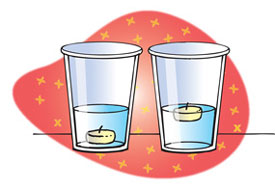 A material that sinks can be made to float.

Similarly, a material that floats can be made to sink.

The factors that affect sinking and floating are the shape of the material and type of material.

The size of the material, however, does not affect sinking or floating.

Pressure is the amount of push (force) acting on a given surface in relation to the area over which the force is acting.

Solids and liquids exert pressure where they rest or stand.

Liquids exert pressure against the walls of the containers where they are in.

Pressure exerted by liquids in a container is related to the depth of the liquid.

The more the depth is increased the greater the pressure. 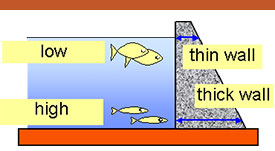 1. Equal volumes of water and kerosene were put in a container. A solid which floats on water but sinks in kerosene was put in the container. Which of the following diagrams shows the correct position of the solid?

2. Fresh eggs were placed in freshwater, salty water, and cooking oil. Which set of diagrams CORRECTLY represents what happened?

1. Kamui made four small holes on the sides of a tin can and sealed each hole with wax. He then completely filled the tin cans with water and replaced the lid tightly. Which one of the following diagrams correctly shows how the water streamed out of the holes when the wax was removed from all the holes?

2. The pressure exerted by a liquid depends on its.

3. Which one of the following practices make use of pressure exerted by liquids?

A. Water flowing down from a tank through a tap
B. Siphoning liquids from containers
C. Filling a petrol tank of a car
D. Drinking soda using a straw.

1. Which one of the following CANNOT increase the speed at which salt dissolves in water?

A. Increasing the amount of salt added to the water.
B. Reducing the size of the salt particles to be dissolved.
C. Stirring the mixture of salt and water.
D. Raising the temperature of the water.

1. Liquids P, Q, R, and S were poured two at a time into four separate containers. The diagrams below show the results after the liquids had settled.

Which one of the following conclusions is CORRECT?

2. A drop of blue ink placed in a glass of water gradually mixes with the water. This happens because of

3. Standard seven pupils carried out an investigation on mixing liquids. They used four liquids P, Q, R, and S and made the following observations

Liquids P, Q, R did not mix with liquid S

They then poured all the four liquids into a transparent bottle and shook the bottle. The number of layers that were formed is

4. The table shows the results obtained by standard six pupils when they investigated liquids which mix and those which do not. 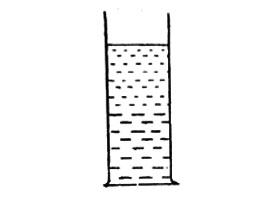 Which pair would give the results shown in the diagram above?