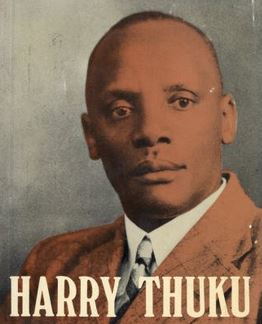 Desai was a publisher of an Asian newspaper called the East African Chronicle.

Later that year, another rally was held in Thika and that annoyed the colonial government. Harry Thuku was arrested in 1922 during an EAA committee meeting near the Norfolk Hotel in Nairobi.

During the riot, the colonial police opened fire and killed many Africans.

This party was formed in 1921 by Harry Thuku and Abdalla Tariara who earlier had joined the Kikuyu Association.

It had membership from all parts of the country.

Reasons why it was formed:

This organisation was formed in 1924. The founder members were:

Jomo Kenyatta was its secretary general in 1928.

The organisation started its own paper which it called Muigwithania or the “reconciler”.

The party ran into problems when the colonial government banned any kind of fund-raising activities to support its work.

There was also disagreement among its members which finally weakened it. It was finally banned in 1940.

This organisation was started in 1922.

Its founder members were:

Arch-Deacon Walter Owen the leader of Maseno Church Mission Society became its leader. Reasons for the formation of the association:

Before independence, the LegCo served the same purpose as the parliament today.

After the Mau Mau uprising, the British realised that they needed to make changes in the political structure of the country.

Some of these changes had to take place in the LegCo.

African members in the Legislative Council before 1960

The first African to be nominated to the LegCo was Eliud Mathu in 1944.

Other Africans nominated to the LegCo include;

In 1957, the first elections for Africans were held and the following people were elected to the LegCo.

Other members who were elected to the LegCo included;

In 1960, KANU and KADU were main political parties.

The First Lancaster House Conference was held in London.

Lancaster House was the Headquarters of the British colonial office and representatives from the two parties attended.

The role of the Legislative Council in the struggle for independence:

Effects of the Second World War on the struggle for independence

When the Second World War started in 1939 all political associations in the country were banned.

Many Kenyan young men were recruited on the side of the British and Americans to fight in the war against Germany, Italy and Japan.

Most of the African troops fought in the Horn of Africa and in Burma.

During the war the British in Kenya realised that they needed to involve more Africans in the political development of the country.

At the same time many political movements sprang up in Kenya to put pressure on the colonial government to grant independence.

Some of the roles the LegCo played for the struggle for independence are:

This organization was formed as Kenya African Union in 1944.

It was formed as an organization through which Africans could express their grievances.

The colonialists forced Africans to change the name of KAU (Kenya African Union) to KASU because they were threatened by the African unity.

In 1945, James Gichuru became the president of KASU.

The name of the party was changed back to KAU in 1946. KAU published a newspaper called Sauti ya Mwafrika.

KASU changed its name to KAU in 1946. Its founder members were:

In 1947, Gichuru stepped down in favour of Jomo Kenyatta.

Aims of KAU were:

KAU had the following results:

KAU was banned in 1952 and its officials (Kapenguria six) were arrested.

It was started by former First and Second World War soldiers and service men.

It started in central province.

It was led by Field Marshall Dedan Kimathi, Waruhiu Itote and Stanely Mathew.

The main reasons for Mau Mau:

Below is an image of a Mau Mau gang. 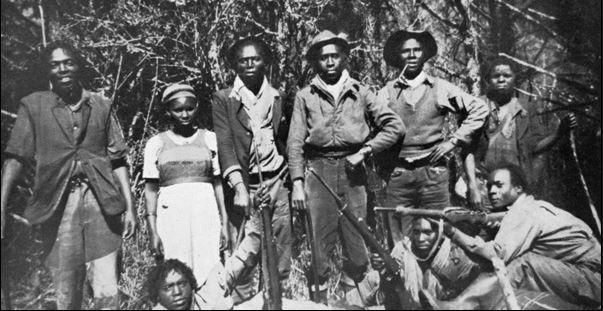 Results of Mau Mau movement include:

Below is an image of Kenyans rounded up by the British Army at the end of the Mau Mau uprising. 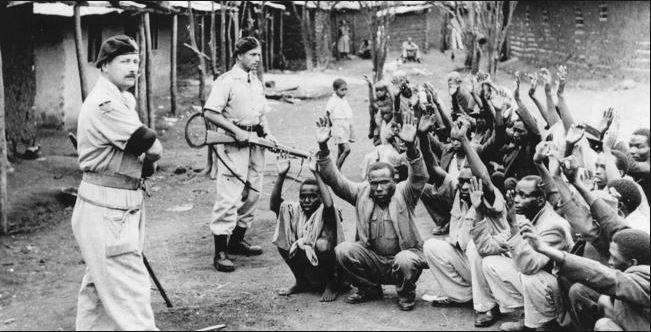 It was formed in March 1960 at Limuru. The main reasons for the formation of KANU were:

Founder members of KANU were:

Later, James Gichuru stepped down in favour of Jomo Kenyatta after he was released.

Reasons for the formation of KADU include:

KANU's logo is shown below. 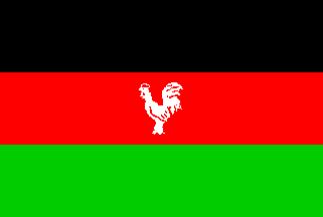