The church; Faith and work

2. Describe the following stages in prayer:

3. '' I thank you, God,that l am not greedy,dishonest or an adulterer, like everybody else".

ii) Do you think God heard this person's prayer? Give reasons to your answer.

4. Which of the following statements is NOT true about prayer?

A. Prayer is a solemn requst or expression of thanks to God

B. Prayer can be regular or informal

C. Prayer can be made in secret or public

D. God likes prayers made in public than in private

A. I agree with Kaloki kneeling is the best posture

B. I agree with Kariuki laying prostrate is more humble way  of offering prayer

D. God likes people who prays as they face the floor than other postures

6. The following are reasons why God may NOT answer our prayers except

A. when we pray with the wrong motive

B. when we pray outside God'd will

C. when we pray in tongues other do not understand

D. when we ask for things to gratify our own pleasures

7. Which is the following is NOT an answer to prayer we can expect from God

8. The person in the Bible whose prayers were NOT answered was

9. Name one vice that can make God NOT answer our prayers.

10. Name the man of God who made a prayer in the belly of the fish.

b) Differences between prayer and magic 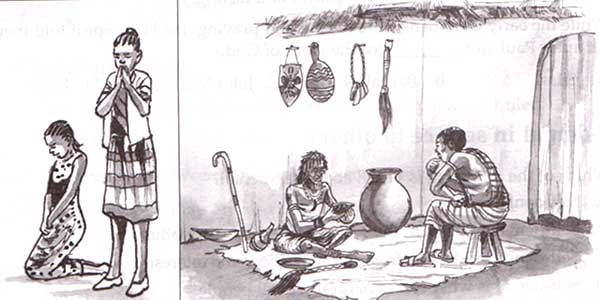 1. The mysterious ppwer that some people believe can make impossible things if they do certain things or say special words is called

2.Which of the following statements is FALSE about prayer and magic

A. In prayer words are said to God through the name of Jesus Christ

B. In magic words are said to ancestral spirits, gods or god desses

3. Which of the following is TRUE about magicians?

A. They are consulted free of charge

B. They are servants of God

C. They require certain sacrifices to perform their rites

D. They are no longer available in modern life

4. Discuss the role of magician in Traditional African Societies

5. Which of the following king consulted a magician ?

c) Relationship between prayer and fasting

3. Which of the following people fasted for 40 days and nights?

4. One of the people in the Bible that fasted for 21 days was

5. Explain the relationship between prayer and fasting.

6. While the early Christians were fasting and praying, the holy Spirit told them to set apart Paul and ____ for the work of God.

d)  Self- denial service to others

1. Which of the following is TRUE about self -denial?

A. Self -denial is easy

B. Self-denial helps us to think about the interests of others

C. Self-denial hinders us from thinking about interests of others

D. Self-denial is what comes naturally to all people

2.Explain how self-denial helps in service to others.

3.Which of the following people did NOT show seif- denial in their lives?

4. Which of the following modern-day people embodied self -denial the most?

5. Explain how Jesus Christ exhibited self - denial in His life on earth.

2. Which of the following people is considered the faith of faith?

3.Describe how christians can support their faith with daily action,why is that important?

f) Meaning of a living faith

1. Differentiate between living and dead faith.

2. According to James 1:27, genuine religion does all the following EXCEPT

A. takes care of orphans

B. takes care of widows

C. helps one to keep pure

D. involves a lot of prayer and fasting

3.Explain the Christian teaching on riches.