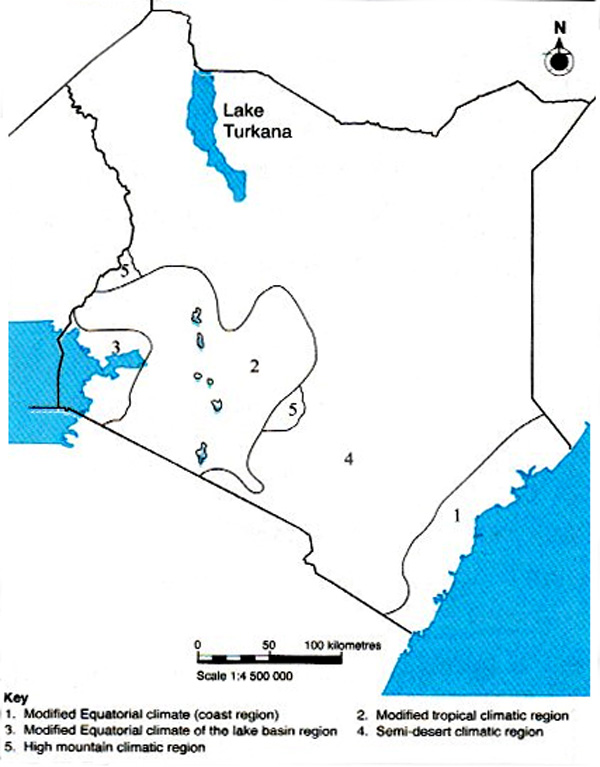 The main climatic regions in Africa are: 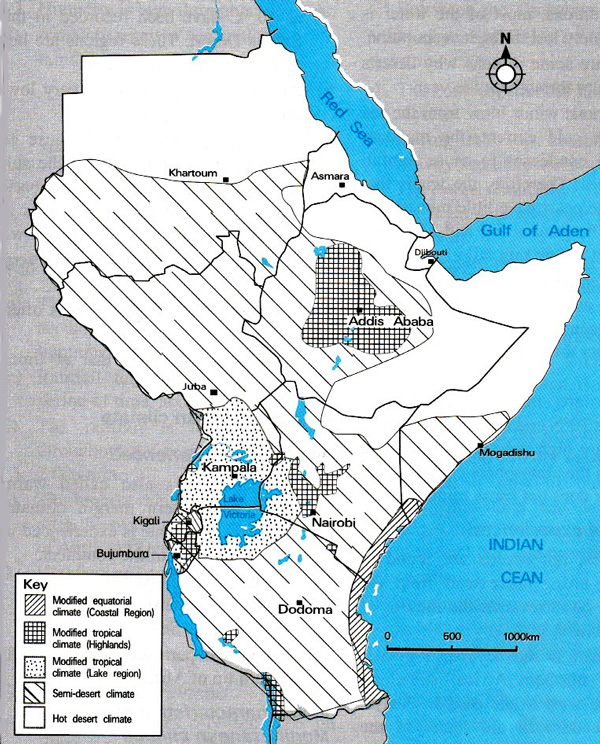 a) The lowland area between latitudes 5ºN and 5º S of the equator. This covers mainly parts of Central Africa which include Democratic Republic of Congo, Gabon and Cameroon.

b) It is also experienced in the Southern parts of Nigeria, Ghana, Benin and Sierra Leone.

a) Temperatures are very high throughout the year, averaging about 26 ºC.

b) The hottest months in the year are March and September when the sun is overhead at the Equator.

c) The diurnal temperature range is very small (about 3 ºC).

e) Humidity is high throughout the year.

g) The rain falls mainly in the afternoons.

h) Rainfall falls mainly over a short period of time, about 15 - 20 minutes.

i) The rainfall is heavy and falls throughout the year, averaging about 2 000 mm.

j) The highest rainfall is recorded soon after the overhead sun in the months of April and October.

a) Between latitudes 5º N and 15º S on either side of the equator, but within the Tropics of Cancer and Capricorn.

b) In Western Africa, it is experienced in the Northern parts of Ghana, Cote d’Ivoire, Togo, Benin and Nigeria.

c) It is also experienced in southern parts of Mauritania, Mali, Niger and Chad.

d) In Eastern Africa, it is experienced in Sudan, Ethiopia, Kenya, Tanzania and Somalia.

e) In Central Africa, it is experienced in Zambia, Malawi, Angola, Namibia,          Botswana and Zimbabwe.

a) The zone experiences hot and humid weather.

b) During the wet seasons, it rains heavily and almost every day.

d) The highest temperatures are experienced when the sun is overhead.

e) Rainfall is mainly infl uenced by the position of the sun. Greatest rainfall occurs when the sun is overhead at midday.

f) The areas near the equator experience two wet and two dry seasons.

g) Generally most of the rain falls between March and September.

i) The rainfall type received is mainly convectional, although some relief rain falls on lower slopes of mountains in the region.

Deserts are places that receive little or no rainfall.

Although many people understand deserts as areas covered with sand and dust, it does not mean that no rain falls there.

Sometimes, there are heavy storms once in a long while which cause sudden floods called flash floods.

Because of high temperatures and dry conditions, most of the water is immediately lost through evaporation.

Below are some reasons why deserts remain dry throughout the year;

a) When moist winds blow from the sea across a cold current, the moisture in them condenses to cause rainfall in the sea.

Therefore, the winds that reach the coast have little moisture in them. This causes fog and mist near the coast but no rain falls.

b) A greater part of the Sahara desert lies far away from the infl uence of large water masses. The winds that blow over the area are mainly hot and dry.

c) Deserts are mainly found along latitudes 30ºN and 30ºS of the equator which are high pressure zones.

Cold air from the atmosphere comes down. Such air does not cause rainfall.

a) In Africa, hot deserts are found in tropical areas and extend from the Western Coast towards the interior of the continent.

b) The Sahara desert occupies a greater part of Northern Africa, stretching from the West to the East.

In Kenya, desert conditions are found in the North and North-Eastern parts of the country where the Chalbi desert is found.

c) Desert conditions are experienced in the South-Western parts of Africa where the Kalahari and Namib deserts are found.

They usually range between 29º C - 38º C, temperatures as high as 40º C have been recorded in the Sahara desert.

b) At night, temperatures are very low, dropping to below 10º C.

c) The skies are clear and because of this, the heat received from the sun during the day is quickly lost back into the atmosphere at night.

This is why the night temperatures are very low.

e) The annual rainfall received is often less than 250 mm.

This type of climate is experienced in very small areas of the continent.

c) It is also experienced in the South-Western tip of Africa.

b) These areas lie in the path of westerly winds.

c) In summer season, winds blow from the land to the sea. Therefore, they are dry winds.

d) Winters are wet because cool moist winds blow towards the land from the sea. The influence of moist westerly winds also makes the winters mild.

b) It is experienced along the Eastern coast of South Africa, especially in Natal and Cape Provinces, as well as in Mozambique.

These areas are under the strong infl uence of the warm Mozambique current and the warm south east trade winds.

a) Summer temperatures are generally high with an average of about 26º C.

b) Winter temperatures are low, averaging about 10º C.

c) Annual rainfall is between 1 000 - 1 500 mm per year, but decreases as one moves westwards into the interior.

d) Rain falls throughout the year, although, the highest amounts fall during summer.

e) Rainfall amount decreases as one moves away from the East Coast into the interior.

f) Humidity is generally low because of the high rate of evaporation.

This climate is mainly experienced in the interior of South Africa, between the Drakensberg Mountains and the Kalahari Desert.

a) The rainfall amount is generally low because the area is inland and the winds blowing from the sea reach here when they are already dry.

b) Most of the rain falls during the winter season and averages about 700 mm per year.

c) The Eastern areas are wetter than those in the West which are close to the Kalahari Desert.

d) Annual temperature ranges from about 26ºC in summer to about 10ºC in winter.

Mountain climate is experienced on high mountains like Mt. Kenya, Mt. Kilimanjaro, the Atlas mountains, the Drakensberg mountains and the Ruwenzori Mountains.

These mountains have snow and ice at their tips.

a) The area receives more rainfall than the surrounding areas.

b) It mostly receives relief rainfall, formed as the warm moist winds are forced to rise up the highlands.

c) The highest amount of rainfall is received on the windward slopes.

d) At the lower slopes, the mountains are warmer and wetter.

e) The slopes facing away from the sea are called leeward or rain shadow slopes.

They receive little or no rain. The winds here are descending and have a cooling effect.

f) Temperature decreases with an increase in altitude. At the very top of high mountains, temperatures are below freezing point.