Matter is anything that occupies space and has mass.

Mass is what matter is made up of.

Matter exists in three states commonly known as solids, liquids, and gases (but there is little known state called plasma). 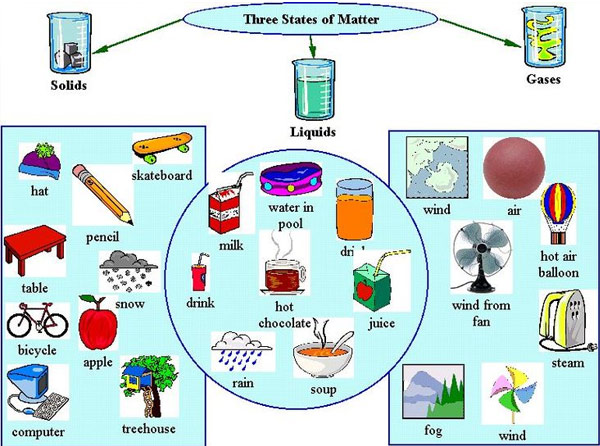 The different states of matter have different characteristics in regard to shape, volume, and mass. 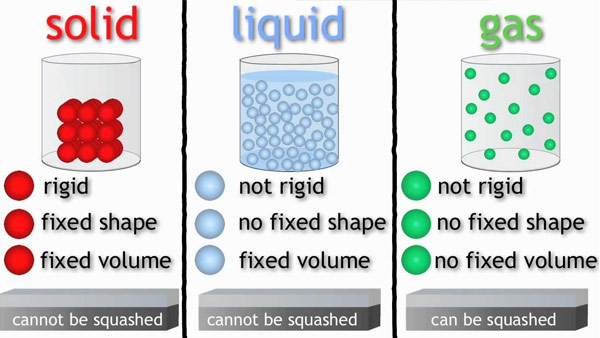 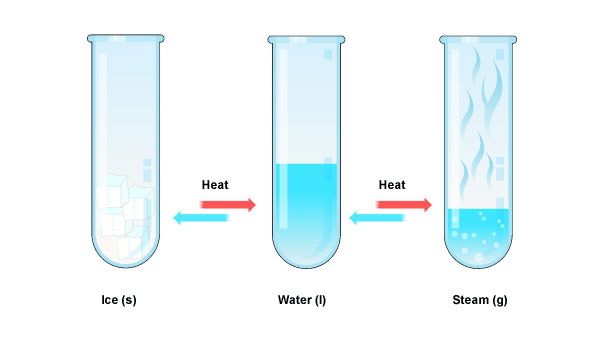 Heat is the amount of warmth in matter.

The amount of heat can be estimated by the change in temperature.

The higher the temperature the more heat a body has.

The effect of heat in matter can be looked at from two points, when heat is absorbed or when heat is released by the matter. 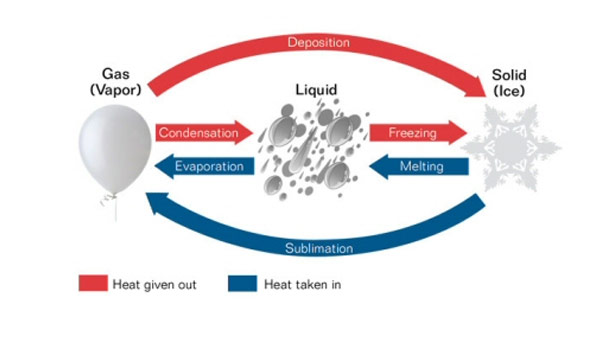 Effect of heat on solids

When solids are heated the following things may take place:

1. Solid expands when heated as they gain heat. Because of this Railway tracks has gaps for expansion. 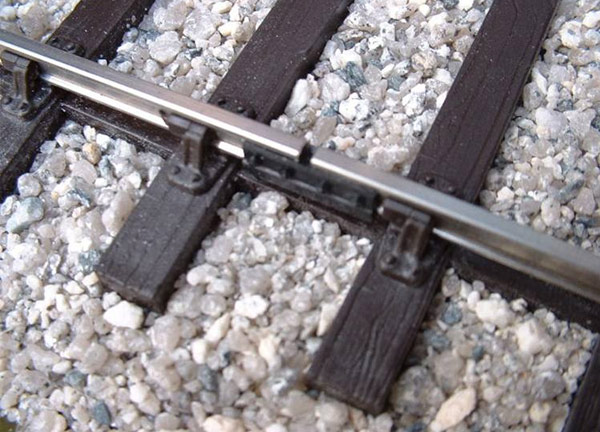 Railway tracks will expand on hot days if no gap this is very dangerous, the train can derail and endanger passengers as well as destroy goods. 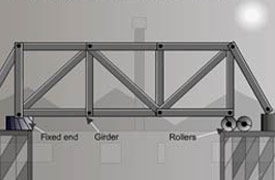 Bridges have fitted rollers to allow for expansion and contraction, allow the bridge to slide over the rollers smoothly when expanded.

Overhead cables and telephone lines are fitted to hang loosely. 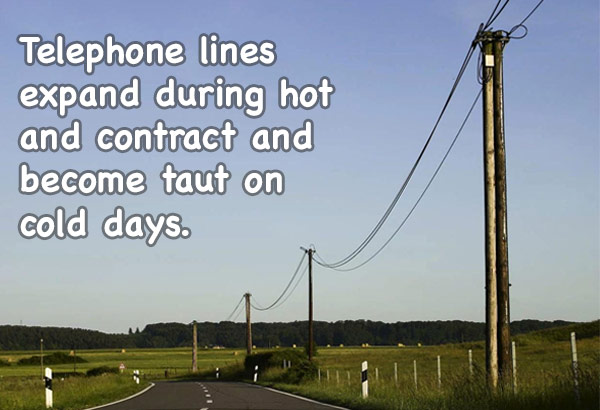 2. The solid melts and becomes liquid when heated further.

The solid contracts when cooled as the loose heat.

Effect of heat on liquids

Liquids can either change to solids or gas when exposed to heat.

1. Liquids increase in size when heated they are said to have expanded.

Pipes carrying water or steam are looped at intervals to allow for expansion. If not the pipes will burst 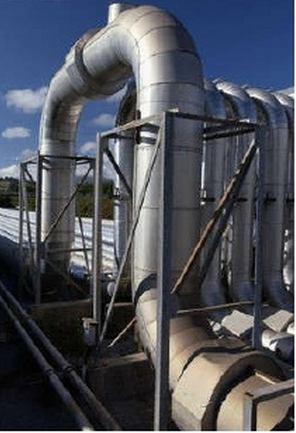 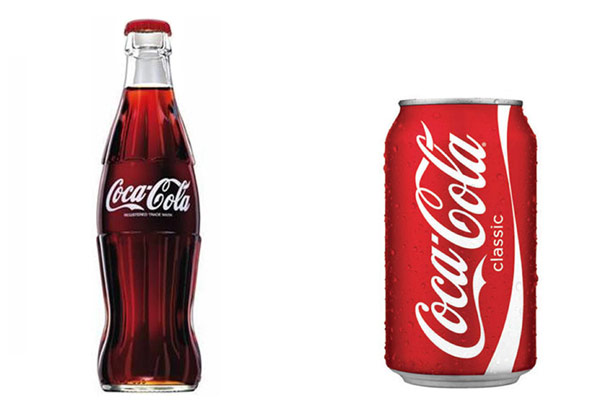 2. When cooled, liquids decrease in size they are said to have contracted.

3. When liquids are heated to a certain temperature they change to gas they evaporate or vaporize.

4. When liquids are exposed to very low temperatures the liquid freezes and become solid. When water freezes it expands.

Effect of heat on gases

A hot balloon uses the expansion of gases. Filled with heated air. As the volume of air increases (expansion), the density of air decreases.

Warm air less dense this it rises and carries the balloon upwards. 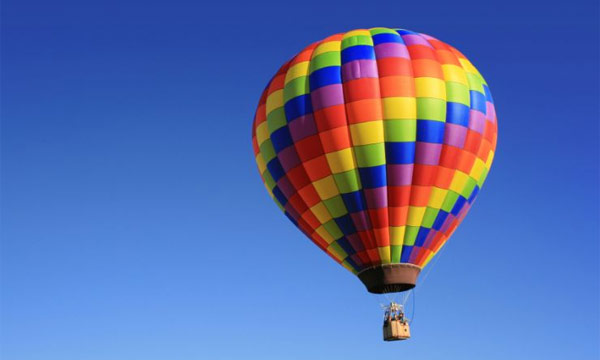 Carbon dioxide gas is released from the baking powder expands when heated causing the dough to rise.

1. Kerosene moves up the wick of a lamp by

2. A piece of wood was tied to a metal block. The metal block measured 6 cm by 3 cm by 2 cm. Both and the wood were immersed into the water in a measuring cylinder as shown in the diagram below. 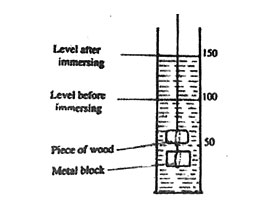 Which one of the following is the volume of the piece of wood? 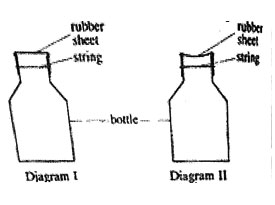 The shape of the rubber sheet changed because

4. A drinking glass was inverted over water in a basin and pushed down as shown in the diagram below. 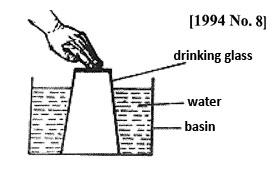 Water did not escape because

A. Air occupies space    B. Water is denser than air
C. The glass is upside down    D. Water cannot move upwards

5. Kimaji placed a piece of wood on the water in a basin. He then held a drinking glass over the piece of wood as shown in the diagram. 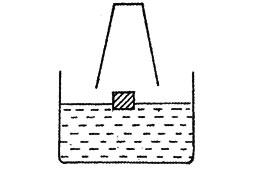 Which one of the following diagrams show what happened?

6. A plastic container with a small hole at the bottom was inverted in a basin of water and pushed down.

Which one of the following diagrams correctly shows the level of water in the plastic container?

7. Which one of the following helps us to drink liquids using straws?

8. Which one of the following materials has a definite volume and does NOT have a definite shape?

1. A balloon was fastened to the neck of a bottle and the bottle was then placed in hot water as shown in the diagram below

Which one of the following statements describes what happened to the balloon?

A. The balloon  expanded     B. Remained the same size

2. The graph below shows the results obtained when pupils heated water and recorded its temperature every minute. 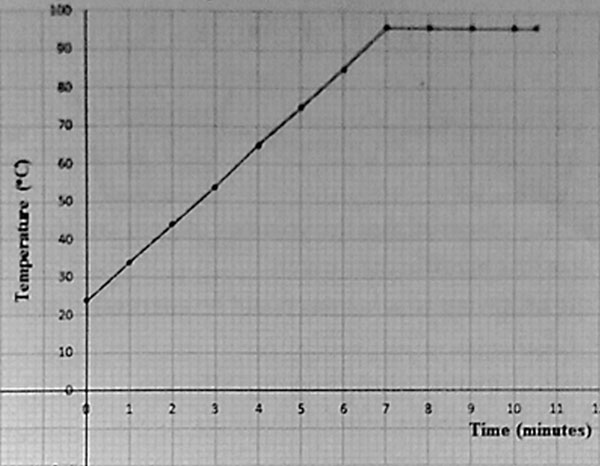 Which of the following statement is NOT correct about the pupil’s results as shown in the graph?

3. Water can be used to drive a wheel such as the one shown in the diagram below. 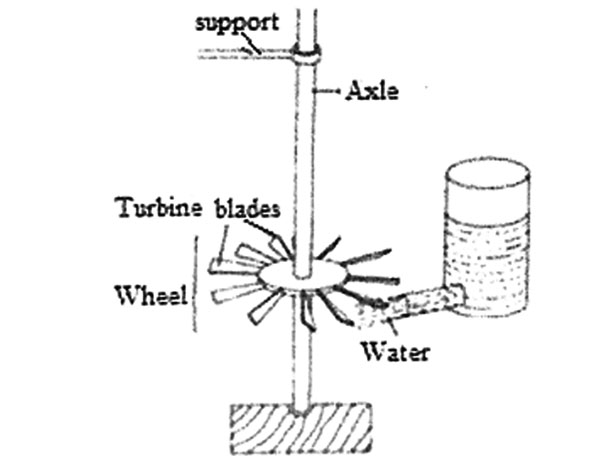 Which one of the following CANNOT increase the speed of rotation of the wheel?

A. Sharpening the bottom end of the axle
B. Using lighter blades
C. Making the axle longer
D. Increasing the amount of water in the container.

4. Malwa was roasting meat in the house and his sister smelt the roasting meat as she approached the house. By which of the following processes had the smell reached her nose?

5. Some standard six pupils set an experiment as shown in the diagram below.

After two hours they observed that the volumes of both liquids had decreased and that there was less paraffin than water. Which one of the following conclusions could be correctly made from their observations?

6. The diagram below shows how matter changes from one state to another due to heating and cooling. 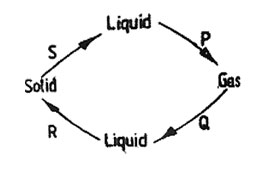 The processes marked P, Q and S are

7. The diagram below shows four methods S, T, U, V that a pupil wanted to use to loosen very tight-fitting metal caps from glass bottles

Which two methods would help her loosen the cap?

8. Pupils at Juu Primary School dropped different objects from the same height and recorded the time taken for each object to reach the ground. Their results were as shown in the table below.

9. Which one of the following changes when a piece of candle wax is heated until it all melts?

10. Which of the following properties of a gas changes when it is heated and then cooled?

11. Four groups of pupils P, Q, R, and S wanted to compare rates of evaporation of different liquids. The materials set up by each group were as follows:

R  Different sizes of containers with equal amounts of liquid

S Different sizes of containers with different amounts of liquid

Which one of the groups of pupils set up materials correctly?

13. A little amount of water in a tin can was heated and the water allowed to boil for some time. The tin was closed firmly and cold water poured on it. The can collapsed suddenly. This happened because

14. A pin was fixed to one end of a metal strip using candle wax. The metal strip was heated as shown in the diagram below.

After a few minutes, the pin dropped. The CORRECT conclusion which can be drawn from this experiment is that.

A. Metals expand when heated.
B. The pin was near the source of heat.
C. Metals conduct heat.
D. The pin was too heavy.

15. The process by which water vapour changes to liquid is called

16. Which one of the following shows the correct order of the processes that take place when ice is heated until steam is formed and the steam cooled to form water? 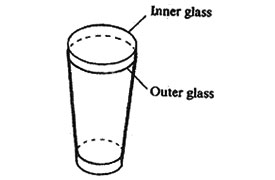 The glasses got stuck to each other. Which one of the following methods could be used to separate them?

18. The diagram below represents a set up that was used to demonstrate a certain property of solids. 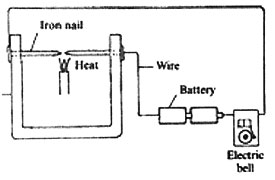 The nails were heated as shown in the diagram, after some time the bell rang. Which one of the following properties did the set up demonstrate?

19. The diagram below represents a set up that was used to demonstrate a property of air.

Which one of the following shows the correct order of what happens when the bottle is heated and then allowed to cool?

20. The diagram below shows processes P, Q, R and S which bring about the change of state of water.

Which two processes require a decrease in temperature?

21. A group of Standard Seven pupils at Joto Primary School constructed an instrument shown below.

Which one of the following could the instrument is used to demonstrate?

22. In a set-up shown in the diagrams below, a balloon was fixed onto the mouth of the bottle. The bottle was then placed in a container with hot water and left for some time. 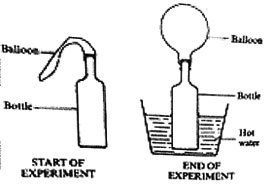 This experiment shows that when air is heated it